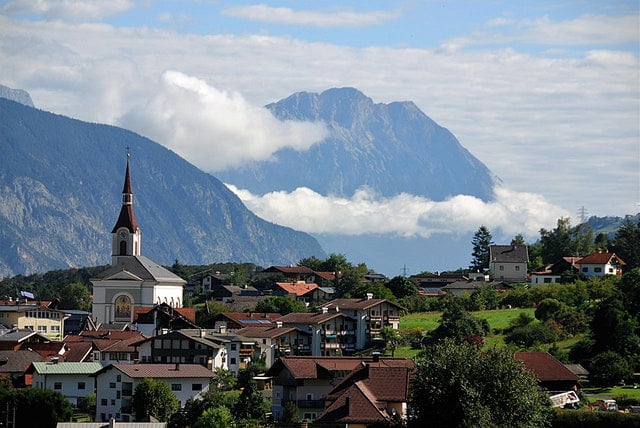 More and more Austrians would prefer to move to the countryside. There are really beautiful small cities which are very close and well connected with Vienna that offer families, in particular, an idyllic green life.

The best small cities to live in Austria are:
–Klosterneuburg
-Baden near Vienna
-Krems on the Danube
-Villach
-Begrenz

Benefits of living in a small city in Austria

One of the most common reasons why life in big cities is suddenly no longer feasible is overpriced living space especially in the city center and nice and green neighborhoods. The search for a suitable property usually takes a long time, so that seekers often simply give up.
It looks a little different in the countryside in small towns. Both the rents for apartments or real estate and the purchase of houses are usually much cheaper. I must say that the prices are not that much cheaper in small cities which are very close to the big cities and in small cities which are attractive for tourists. Small towns offer more living space at affordable prices. Check the rent prices in Austria.

A big advantage of small towns is that they are children-friendly and the properties are often very close to nature. Here the kids can play in peace, explore the world and grow up in a green family idyll. At the same time, the criminal is lower and the security is higher. There is no wonder that many families just want to get out of the city

The big advantage of Austrian small cities is that they are not cut off from the outside world. On the contrary, because both the accessibility and the connections are usually really good. Despite the small town, families can quickly move to the big city to do specific errands. People who live in small cities can commute well and flexibly by car or by train. Also, you can do everything on-site by bike.

Most of the small towns in Austria are rural. They offer a natural adventure pool, which is suitable for young and old and offers a lot of relaxation, fun, and sport for the family. In addition to a direct connection to nature.
Also, the air in small towns is often much cleaner. The exhaust gas pollution is usually much higher in large cities so that small-town life also has a positive effect on your own health.

These small cities are perfect for families who would like to enjoy the benefits of having a bigger living space, lower housing prices, higher security, and beautiful nature. All of the cities listed have a population between 20.000 and 60.000. This means that you have everything necessary which you need for your everyday life such as big supermarkets, schools, kindergarten, doctors and similar. Most of them are very close to the big cities such as Vienna which means that you can always travel to the big city when you like to visit some big event or to go a big shopping.

Klosterneuburg has established itself as a city with a very high quality of life and with a population of around 30.000 people. Near Vienna, only approx. 15 minutes by car from Vienna city center, Klosterneuburg is a city with an excellent standard of living and recreation! As one of the most scenic and attractive Viennaease communities – nestled between the Danube, Kahlenberg, and Leopoldsberg – Klosterneuburg is the third-largest city Lower Austria’s more than 150 km of marked hiking trails, a beach, and a river bath in the romantic Danube floodplains.

South of Vienna on the edge of the Vienna Woods is Baden, one of the most beautiful small towns in Austria with a population of around 25.000 people.
Not only is the small town a designated thermal town with 14 sulfurous springs, which the Romans and the Habsburg emperors already appreciated, Baden near Vienna also proves one thing with its elegant townhouses, palaces, and villas, its rose garden, and many romantic squares very own charm.
Also known as the “Biedermeier” or imperial city, Baden near Vienna is rightly considered one of the most beautiful places in Austria, especially in autumn when the many Heurigen are open and serve the famous Viennese wine.

Krems on the Danube

Krems is located about 70 kilometers west of Vienna and it has a population of around 25.000 people.
Krems is another small city but one of the most beautiful cities in Austria.
The reason for Krems ‘beauty is, on the one hand, the idyllic and climatically favorable location, which favors wine-growing, and, on the other hand, the historic old town. The old town of Krems an der Donau is part of the UNESCO World Heritage “Wachau Cultural Landscape”. Krems on Danube city gate Austria But the real reason why so many people like to come to Krems is the wine because it is the white wine capital of Austria.

The Austrian city of Villach is the second-largest city in Carinthia with a population of around 60.000 people and is located on the Drau River. The several really magical lakes are located in the vicinity of Villach. It is also very close to the capital of Carinthia state Klagenfurt. Villach itself as a small city provides very good job opportunities with over 100 medium-sized or big employers. The company with the highest number of English speaking jobs for ex-pats is Infineon.

Bregenz, the capital of the state of Vorarlberg, with a population of around 30.000 people is mostly not on the radar of travelers to Austria. Bregenz is one of the most beautiful cities in Austria and above all one of the most beautifully located. It is located directly on Lake Constance and close to the Eastern Alps in the border triangle of Germany, Austria, and Switzerland. Many Austrians are using this opportunity and working in Switzerland where the salaries are much higher in comparison to Austria.